The Candy Man Set To Climb 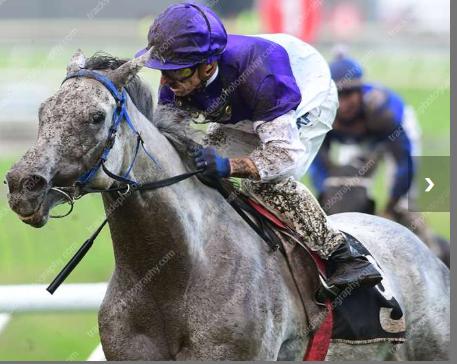 Trainer Barry Baldwin believes The Candy Man will need “a step ladder” to overcome his task to win the Premier’s Cup at Eagle Farm on Saturday.

The Candy Man, a grey gelding which races in the colours of the famous Gunsynd, is attempting to extend his winning sequence to seven in the 2200-metre Group 3 feature.

Gunsynd is rated among the country’s greatest horses, winning 29 races, and he is the only horse to win all four of the nation's premier miles and a Cox Plate.

The Candy Man made it six wins from 10 starts when he won a Class Five Plate at the Gold Coast last Saturday.

He was originally second emergency for the Premier’s Cup before scrapping into the field following the scratchings of Megablast and Order Again.

“He’s got to step up in this, in fact it’s more like he needs a step ladder,” Baldwin said.

“It’s a massive jump up in class from a Class Five Plate at the Gold Coast to a Group 3 but he’s won six in a row now.

“He’ll probably need to win or at least run a place to get into the Brisbane Cup in two weeks.”

The Candy Man is part-owned by Lucky Pippos, the brother of the late George Pippos.

George Pippos was a prominent owner and rugby union identity, who left Gunsynd’s colours to his brother following his death about 10 years ago.

“He’s got nothing in similarity to Gunsynd other than being grey,” Baldwin said.

“He’s definitely not as pretty as Gunsynd, particularly after he underwent a nine-hour operation when he broke his jaw in several places following a stable accident early in his career.

“He had two operations on the jaw including one to fix his smashed teeth and still races with seven plates in his jaw.

“He then had a third operation when he hurt a hind leg when he was recuperating.

“He also races with 42 screws and between him and me, we’re making good progress.”

Baldwin is on the mend following a recent hip operation and is down to the use of one crutch.

“I was on crutches for a while after the hip operation but I’m getting around a lot better now and I’m only using one crutch,” Baldwin said.

The Candy Man won his maiden at Doomben in December before unleashing a Bernborough-like finish to win going away by one length in an 1800-metre Class 1 at his next start.

The win caught the eye of the Australian racing public after he stood flat-footed in the barriers and missed the start by a conservative 10 lengths before the last-to-first win.

He was immediately banned and ordered to pass a barrier test by stewards and has since gone on to win four races at Doomben and the Gold Coast.